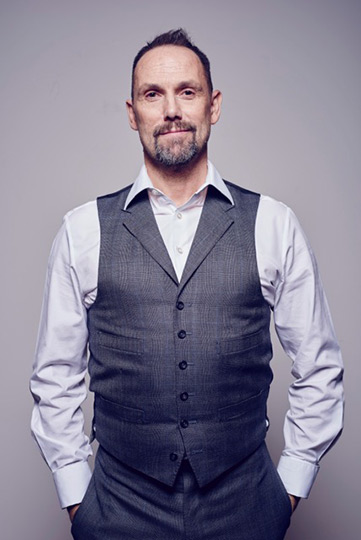 Born in Utrecht, The Netherlands, Bouke de Vries studied at the Design Academy  Eindhoven, and Central St Martin’s, London. After working with John Galliano, Stephen Jones and Zandra Rhodes, he switched careers and studied ceramics conservation and restoration at West Dean College. Every day in his practice as a private conservator he was faced with issues and contradictions around perfection and worth:

‘The Venus de Milo’ is venerated despite losing her arms, but when a Meissen muse loses a finger she is rendered virtually worthless.’

Using his skills as a restorer (c.f. Ron Mueck’s model-maker skills), his ‘exploded’ artworks reclaim broken pots after their accidental trauma. He has called it ‘the beauty of destruction’. Instead of reconstructing them, he deconstructs them. Instead of hiding the evidence of this most dramatic episode in the life of a ceramic object, he emphasises their new status, instilling new virtues, new values, and moving their stories forward.

The more contemplative works echo the 17th- and 18th-century still-life paintings of his Dutch heritage, especially the flower paintings of the Golden Age, a tradition in which his hometown of Utretch was steeped (de Heem, van Alst, van Huysum inter alia), with their implied decay. By incorporating contemporary items a new vocabulary of symbolism evolves.

These ‘dead natures’ – natures morts – give everyday household objects, a plate, a milk jug, a teapot, a modern poignancy that refers back to the vanitas and momentomori paintings of that period. An installation in de Vries’s London house is arranged in the manner of Daniel Marot with white Delft domestic pottery rescued in fragments from 17th- and 18th-century rubbish tips, now dug up and partially pieced together. Among them are two small artists’ paint pots with the pigment still in them, as possibly once used by – who knows? – Vermeer or Rembrandt.

THE BEAUTY OF DESTRUCTION

In this flawed world perfection seems to be an attainable goal – for example, the body of Governor Schwarzenegger, or the self-made Catwoman, Mrs Wildenstein. But not-quite-perfection is often easily dismissed and discarded. As a ceramics conservator Bouke de Vries is faced with issues around perfection on a daily basis.

Where even an almost invisible hairline crack, a tiny rim chip or a broken finger render a once-valuable object pratically worthless, literally not worth the cost of restoring. There’s something incongruous about the fact that such an object, although still imbued with all the skills it took to make it – be it first-period Worcester, Kang-xi or Sevres – can so easily be consigned to the dustbin of history.

The Venus de Milo is venerated despite losing her arms. Why not a Meissen muse?

Moreover, even when an object is ‘worth’ restoring, some owners prefer to hide the damage as much as possible, to deny the evidence of what was probably the most dramatic episode in the life of the piece. Especially since modern methods mean other options are available.

(Interestingly, the rocketing auction prices of Pablo Picasso’s hand-painted ceramics are beginning to make a difference here. As are the much-worked surfaces of pots by Turner prize winner – and de Vries client – Grayson Perry.)

In his new series of ‘exploded’ artworks de Vries is reclaiming broken ceramic pieces after their accidental trauma. Instead of reconstructing them, he is de-constructing them. Instead of hiding it, he emphasises their new status, using his honed conservator’s skills (compare Ron Mueck applying his skills learnt as a model maker) to instil new virtues, new values, and to move their stories forward.

The spaces in between the fragments become an essential part of the structures and the objects sometimes take on a cubist quality. With some works the viewer may be confused as to where the original makers of the piece stop and where the artist begins, making the work biographical and giving it new currency.

More contemplative works echo the 17th- and 18th- century still life paintings of de Vries’s Dutch heritage, especially the flower paintings of the Golden Age, a tradition in which his home town of Utrecht was steeped – by such artists as de Heem, Kalf, van Alst and van Huysum – with their implied decay (and stories of the slow-working artists’ studios stinking of their real-life decay) and by incorporating contemporary objects a new vocabulary of symbolism evolves.

The still lifes give everyday household objects – a milk jug, a teapot, a cress drainer – a certain poignancy with references to the vanitas and memento mori paintings of that period.

An installation in de Vries’s London house is arranged in the manner of Daniel Marot with white Delft domestic pottery rescued in fragments from Dutch rubbish tips of the 17th and 18th centuries, now dug up and partially pieced together.

The figurative pieces address life today just as they addressed life then at the time they were made. Subversion is never far away. The Meissen muse becomes a binge drinker, giving us the finger in a scene where Hogarth meets Vicki Pollard.

The mountings chosen for some of  these works allude to objects already in museums: prehistoric pots with missing areas often utilise perspex as in the Pre-Industrial Utensils collection at the Museum Boijmans-van Beuningen; and classical sculpture, where missing sections of elbow or shin are replaced by metal dowels.